Chet Atkins described JP Cormier as ‘One of the most important guitarists of his generation’. With 13 solo albums, 12 East Coast Music Awards, and a touring resume including more than 20 performances at the Grand Ole Opry and thousands of shows and festivals in Canada, the US and abroad, JP Cormier has long been a household name to Atlantic Canadian audiences. Incredibly proficient on a wide range of stringed instruments, and even better known in some circles for his original story songs, he is also an accomplished music teacher and publisher of instructional aids. JP will conduct two workshops on Saturday, and direct the Saturday night concert.

Raised in St. Peters, Richmond County, Cape Breton Island, Roger is an accomplished singer, songwriter, and musician. Former lead singer and songwriter for the band Breakin' Tradition, Roger has two albums featuring original music to his credit that have received extensive air play in Canada, the United States, Russia, England, and Australia. His original song "Rollin' on the Sea" was adopted by the Summertime Revue as part of their stage show, and reached audiences all over Canada. Roger plays lead guitar and enjoys a reputation as one of the finest banjo players in Nova Scotia. Roger has over 25 years teaching experience, starting in 1982 with the Ryerson music program in St. Catharines. He returned to Nova Scotia and taught for almost 20 years at the Halifax Folklore Centre. In 2005, Roger taught at the Canadian Conservatory under the leadership of director Cindy Grantham. In 2006, Roger opened his own Halifax studio, The Little Zen Music Dojo, helpings students learn while developing their own personal style. 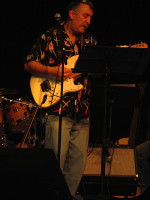 A native of Rockdale, Cape Breton Island, Hank is a prolific songwriter with Acadian roots. He has written music for The Lunenburg Dinner Theatre Company and the South Shore Players. He is the principal songwriter for the bilingual group, Collage,(debut CD, “Scenes of Home” in Sept. 2009), and for the Summer Troupe who will present their historically based show, “Glimpses” for the fifth year at the Fisheries Museum of the Atlantic this summer. In 2011 Hank released a 19 cut CD of original music entitled, “Middletunes”. An accomplished guitarist and singer with a lifetime of writing and performing experience, Hank is retired from a long and successful career as a schoolteacher and school principal. We are delighted to have his special expertise in songwriting, and education, at Music Camp this year where he will offer an intensive, day-long workshop.

Darren is a highly sought after multi-instrumentalist based in Halifax. He has released 3 solo albums, 2 have been nominated for the ECMA "Instrumental Album of the Year". Busy in the Halifax pub scene since the late nineties, he joined JP Cormier in 2004 to perform, travel, and record on a full time basis. This led to broader exposure and soon Darren was working with many different acts as a session player/sideman. These days, if he's not traveling to places like Australia, the US, UK, or Middle East, he stays busy full time with bands like Sprag Session (formerly the Colin Grant Band), tours with the Rankin Family and David Francey, regular shows with Matt Andersen, and still playing Halifax pub shows when he's not on the road. 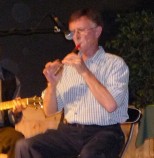 Irish music afficianodos world-wide recognize Paul's distinctive brogue - from his weekly radio program The Music of Ireland - now in broadcast for 30 years. But local audiences know him for his effervescent tinwhistle playing, his knowledge about the music, and how to interpret it on his chosen instrument. Paul is a veteran workshop leader for absolute novice and developing tinwhistle players, and offers two progressive workshops at Music Camp this year - one for the absolute newbie, and another to work on technique. Paul's package of reference and on-line links for further study is a bonus for his workshop participants. 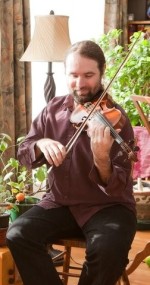 A versatile violin player and teacher, Anthony has a broad repetoire of genres from classical violin to traditional fiddle. He tours regularly with singer Lennie Gallant and is a member of the Halifax bands The Gig Dog and Papilio. As a music student at Dalhousie University Anthony studied classical violin under Phillippe Djokic. He has won fiddle competitions throughout Canada including the Maritime Fiddle Championship. In 1990 he came third in the prestigious Canadian Open in Shelburne Ontario, and he was chosen to represent Nova Scotia at the Grand Masters Competition in Ottawa for six consecutive years. Anthony has played with Symphony Nova Scotia, Bruce Guthro, Cyril MacPhee, Anne Murray, and Peggy Seeger. He brings a broad spectrum of fiddle genres and techniques to our Music Camp workshops. 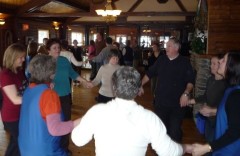 This dance group was formed a few years ago to honour legendary dance caller Roddie MacKenzie – a native of St. Peter’s with strong Scottish roots and a bias for ‘neat’ sets, stepped ‘correctly’. Roddie was an influential figure on the local dance scene from the 1940’s through early 70’s. In the past few years, the Society has run public dances and workshops featuring Roddie’s favourite patterns of 4 couples in 4 figures (3 jigs and a reel), known locally as Roddie’s Set. Veteran caller Colette Sampson MacLean will lead Music Camp square dance sessions with lively music by  fiddle and piano maestro Kevin LeVesconte, celtic guitar veteran Al Martin, and fiddler-provacateur Allie Mombourqette.﻿ 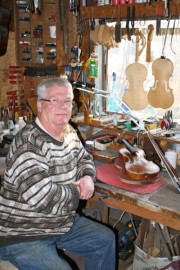 Luthier in residence, and luthier workshop

A native of the Black Forest in Germany, Johannes had an early start in his chosen trade. By age 12 he knew he wanted to make violins. His formal training began in 1970 at the world-renown State Trade School for Violin Making in Mittenwald, Bavaria. After the 3 year degree program he apprenticed at violin shops in Switzerland and the Netherlands.. A work opportunity triggered his immigration to Canada in 1979 and worked in Toronto for a number of reputable string instrument shops, then opened his own workshop. In 1985, he moved with his future wife Sharon to her family home in Grand Anse, Cape Breton where he has been operating his renown Violin Shop ever since, making valued instruments for notable fiddlers, and providing his invaluable advice and services to string players from near and far.

Greg is best described as a traditional music enthusiast who likes to fool around with a few different instruments, and has found a welcoming place in his new home of St. Peter's to share and expand his musical interests. Greg has been a driving force in the organization of open jam sessions and workshops in this part of Cape Breton over the past five years or so, and has  taken the lead role in coordinating - and managing this first annual Music Camp on the Canal. He is delighted to have the ongoing support and cooperation of some fine local musicians; the St. Peter's Economic Development Organization, the Camp's organizational partner; and the Municipality of Richmond County, our major funding partner.