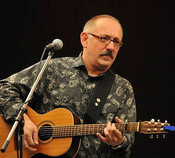 Roger returns for his third year on faculty, and second as our Music Director -  and as always - an important link to the musical traditions of Richmond County. A native of St. Peter's, he is an accomplished singer/songwriter, a talented and versatile multi-instrumentalist, one of Halifax's busiest musicians, and a very experienced music teacher operating his own school. As Camp Music Director again this year, Roger will be co-ordinating the overall workshop program. Campers are offered  a rich mix of learning experiences. He will also teach our successful Singing 101 voice workshop, and an Intro to Ukelele workshop. Roger will lead a session on Celtic music traditions in Cape Breton, assisted by local players. Roger is also tasked with organizing the All Star Concert which will feature our faculty and – maybe – some surprise special guest stars! 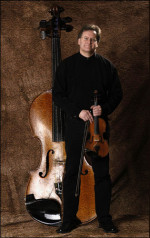 Allie has been at the epicentre of Cape Breton's music revival and its rise in international recognition over the past four decades. With over 125 album projects to his credit as a studio musician, he has recorded and toured with Atlantic Canadian musicians including John Allan Cameron, Rita MacNeil, Ashley MacIsaac, The Rankin Family, Natalie MacMaster, Ron Hynes, Stan Rogers ... just to name a very few. He has been a Music Director for the East Coast Music Awards (1995), and band leader for two editions of the iconic Cape Breton Summertime Review. He has recently been touring with Dave Gunning and working on studio projects. Allie is a highly accomplished teacher and operates a private music school. We are very pleased to welcome Allie back to Music Camp on the Canal to teach some very special guitar and fiddle workshops. 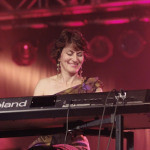 We are delighted to offer Cape Breton piano workshops, in response to more than a few requests over the last two years. We are even more delighted to have Hilda Chiasson as our piano guru. Hilda is one of the most sought after piano players of this generation and has played on more than 50 recordings in Canada, Ireland, Scotland, Denmark and the US. A native of Cheticamp where she played for dances and recorded since she was a teenager, Hilda is also a very good step dancer and has played and recorded with a who's who of Cape Breton fiddlers including Winston Scotty Fitzgerald, Donald Angus Beaton, Jerry Holland, Carl MacKenzie and J.P. Cormier. Hilda has performed throughout Canada, the US, Scotland, Ireland and Denmark as well as in Dubai, Bahrain, and Afghanistan. 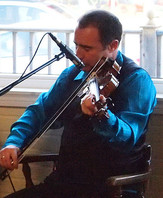 It's hard to know where to start when it comes to introducing Dwayne Coté.  Fortunately he doesn't need an introduction to anybody in Cape Breton, or to many people who are enthusiasts of contemporary traditional fiddle music. For some it would be enough to say he is Gordon's son.﻿ For the rest of you: Dwayne is a unique musician who has taken Celtic music to new plateaus on a global scale. He is a true virtuoso, and one who has infected gypsy, old time, swing, country, bluegrass and many other genres – including classical music – with the Celtic traditions that are his roots. Dwayne loves to teach people - especially the young 'uns - to play the fiddle, and to help guitar players feel and play Celtic rhythms. A veteran music camp faculty member, Dwayne will offer his new Fiddle-from-Scratch workshop this year. 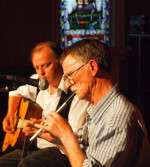 Paul is an experienced tinwhistle instructor who offers his students an animated workshop, and plenty of take-home resources to practice new skills. A transplant to Cape Breton from his native Ireland, Paul has been active in bringing contemporary Celtic, and especially Irish music to the Strait area of Cape Breton and to the world via the internet. He created and hosted a weekly radio show, The Music of Ireland, for 30 years, while becoming an accomplished tin whistle and bodhran (Irish drum) player with a long list of local performances. He participates in local music projects as an MC and session player for the St. Peter's Summer Ceilidhs and Jams; and as a whistle instructor for Kitchen Rackets events over the past 8 years or so. 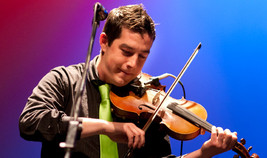 Hard-driving but clean, lively and passionate, traditional yet original—Colin Grant's fiddle playing has inconspicuously stepped to the forefront of the East Coast traditional music scene and people are sitting up and taking notice. Although most at home with traditional Cape Breton fiddle music, his versatility as both a lead and side musician has given him experiences in a variety of traditional styles, in addition to folk, rock and country genres. Colin has put this experience to use with his current band Sprag Session, playing a dynamic and thoughtful mingling of beats and melodies from an extensive host of musical influences. He tours solo and with Sprag Session regularly with performances in the US, Scotland, France, China, Indonesia and across Canada. 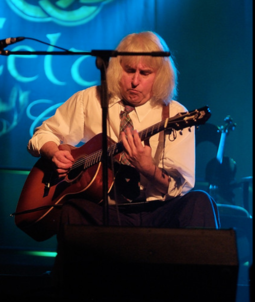 Internationally recognized as a master player of stringed instruments, Dave MacIsaac is a musician's musician and is widely admired as such. He plays traditional fiddle tunes with fiery passion, and his stunning guitar playing, whether solo or as accompaniment, is industry legend. Always interested in expanding his knowledge of Celtic music, Dave has thousands of recordings of Cape Breton traditional music. He is well-known for his archival knowledge of tunes. He is often called upon to name that tune for recordings, and is in high demand for session work. John Allan Cameron often stated that, "If a cod fish had strings, Dave MacIsaac could play it!" He is a regular at the annual Celtic Colours Guitar Summit. Dave has toured international stages with Natalie MacMaster, John Allan, and far too many other notable Cape Breton musicians to mention here. 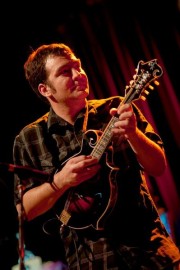 In our first year we were thrilled when Darren accepted our invitation to join the inaugural Music Camp faculty. He taught some dynamite mandolin and tenor banjo workshops over the last two years here, and given stellar mandolin and banjo performances at our All Star Concerts. Since then he's been busy touring and recording his own multi-instrumental buffet; as a member of the amazing Sprag Session (with Colin Grant & Co.); and providing masterful and energetic bass guitar work for Matt Andersen - among other projects near and far. We are privileged to have Darren back on our faculty for the third time. Darren will offer tenor banjo and mandolin workshops and maybe more (all you have to do is ask - use the registration form).

Carol Martell, An introduction to traditional Acadian folk songs
Carol is a member of one of Richmond County’s most prolific musical families. Growing up in a French Acadian home she has strong cultural roots and a life-long love of the traditional songs – which she sings to her own guitar accompaniment. In this workshop she will teach you a few fun, old-time upbeat Acadian songs, and how they were originally sung. Lyrics with guitar chords will be provided to students in advance of camp, so you can get a bit familiar with the material before you come. 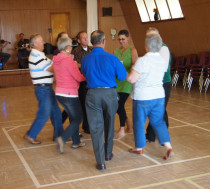 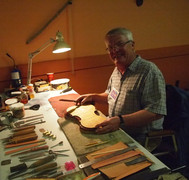 Johannes is a veteran workshop leader from our first Music Camp; and from its inception 7 years ago as our on-site luthier during Kitchen Rackets @ Celtic Colours International Music Festival. A native of the Black Forest in Germany, Johannes was schooled and apprenticed in the European tradition. Discovering Cape Breton as a land of opportunity for a luthier - we have more fiddles per household than anywhere in the world- he has operated his Fiddle Shop for over 30 years in Grand Anse, Richmond County. He brings his tools and instrument examples to Music Camp to demonstrate and describe the techniques of evaluation and caring for stringed instruments with particular emphasis on his specialty building and restoring violins. Johannes will deliver a workshop for instrument owners and enthusiasts, and will provide on-site luthier services to campers, including assessment of their instruments, tunings, minor adjustments and emergency repairs. 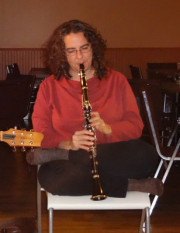 Barbara came to Music Camp in our first year to learn about Celtic tinwhistle. An experienced flute and clarinet player, we at Kitchen Rackets learned that Barbara's day job is Professor of Music and Composition at Princeton University. First year she brought her traditional slow flute, a Japanese Shakuhachi, to some lively jigs and reels. Last year she brought us some new workshops and her bass clarinet, among other delights. This year promises even more interesting surprises as she brings campers into the realm of the Composer. There will be a call for campers to bring a tune they have created, or are dreaming of writing to her workshop. Barbara will repeat her popular 'Quick-Learn to Read Music workshop. Great for novices and as a refresher.